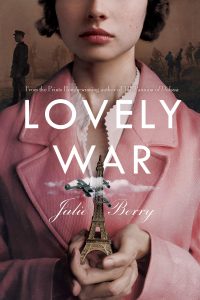 Lovely War puts a creative spin on the classic Greek myths, intertwining the myth of the goddess of love and the god of war with the World Wars to discuss why love and war are always bound together. Just as the Greek myth goes, Aphrodite and Ares are caught in a golden net set by Aphrodite’s jealous husband Hephaestus, but this reimagined tale is set in the backdrop of World War II. Before exposing her to the rest of the Greek gods, which occurs in the myth, Hephaestus allows Aphrodite to plead her case, to which Aphrodite tells the love story of two couples who met during the Great War. Berry combines the symbolism of love and war with music and death by introducing the perspectives of Aphrodite, Ares, Apollo, and Hades, each of whom influenced the two love stories.

gods—Aphrodite in particular—and how their affinities are representative of their beliefs and attitudes toward war. Ares naturally thrived off of war, while Aphrodite was attracted to conflict for the beautiful love stories that bloomed quickly under irregular circumstances. It made the gods much more realistic with flaws and desires that only become heightened during a state of conflict.

Berry brings up topics from history that are not as frequently discussed in World War books, such as the segregation and discrimination of black soldiers during the war. She also discusses the influential role of music during the Great War and how certain black soldiers used jazz to uplift themselves. Using the love story of Colette and Aubrey, she brings in real groups and people such as the 369th Infantry Regiment, or Harlem Hellfighters, and their bandleader James Reese Europe. I thought it was a clever way of connecting war with music and love.

Overall, I highly recommend this book to anyone interested in historical fiction or Greek mythology, as this book was an enjoyable read. As someone who knows much about Greek mythology, I appreciate the details and complexity Berry adds to the love stories during the Great War and the Greek Gods who took a liking to these four individuals.