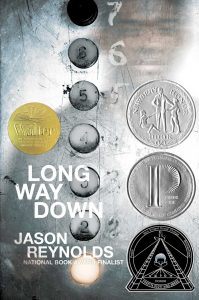 Shawn is dead. Shot. Blood running down the streets. Sirens. Lots of sirens. Yellow Tape. DO NOT CROSS. Just another day.

In the aftermath of Shawn’s death, Will is faced with yet another loss in life. Struggling to understand why and the actions he must take to avenge his brother’s death, he is both certain in what he needs to do and yet distraught at the reality of needing to put it all in motion. In a riveting and hypnotizing 68 seconds in an elevator on his way to seek revenge, Will is faced with the actions he must take and his questions surrounding loyalty, revenge, grief and fear. He is faced with questions he doesn’t have answers to, with new revelations about circumstances in his past, and with the now not such certain conviction that love and loyalty to your family must hold steady at any cost.

Although the rules in his neighborhood are non-negotiable facts…No Crying, No Snitching, Revenge…deep down in his psyche and soul he questions the cycle of violence which has surrounded him his entire life. After leaving his grief-stricken mother upstairs in their apartment, Will descends to the lobby and embarks on a journey of self-discovery, self-awareness and new truths about his brother. In this very unique style of writing, the author highlights the darkness and violence that exist in all people to some degree and challenges the main character to realize that either ignoring the violence or embracing it is a choice that can define his own character and not an inevitable conclusion.

With an unresolved ending left to a myriad of interpretations by the reader, Long Way Down is an insight into how a young man conceptualizes manhood and his masculinity in the backdrop of an American neighborhood infested with gang violence and drugs, and highlights the struggles he faces between perception and reality and how the consequences of each will set the stage for the next cycle in his life.