YA Books Reviewed by Teens

Long Way Down by Jason Reynolds, Reviewed by Dylan Mondrus

Shawn is dead. Shot. Blood running down the streets. Sirens. Lots of sirens. Yellow Tape. DO NOT CROSS. Just another day.

In the aftermath of Shawn’s death, Will is faced with yet another loss in life. Struggling to understand why and the actions he must take to avenge his brother’s death, he is both certain in what he needs to do and yet distraught at the reality of needing to put it all in motion. In a riveting and hypnotizing 68 seconds in an elevator on his way to seek revenge, Will is faced with the actions he must take and his questions surrounding loyalty, revenge, grief and fear. He is faced with questions he doesn’t have answers to, with new revelations about circumstances in his past, and with the now not such certain conviction that love and loyalty to your family must hold steady at any cost.

Although the rules in his neighborhood are non-negotiable facts…No Crying, No Snitching, Revenge…deep down in his psyche and soul he questions the cycle of violence which has surrounded him his entire life. After leaving his grief-stricken mother upstairs in their apartment, Will descends to the lobby and embarks on a journey of self-discovery, self-awareness and new truths about his brother. In this very unique style of writing, the author highlights the darkness and violence that exist in all people to some degree and challenges the main character to realize that either ignoring the violence or embracing it is a choice that can define his own character and not an inevitable conclusion.

With an unresolved ending left to a myriad of interpretations by the reader, Long Way Down is an insight into how a young man conceptualizes manhood and his masculinity in the backdrop of an American neighborhood infested with gang violence and drugs, and highlights the struggles he faces between perception and reality and how the consequences of each will set the stage for the next cycle in his life. 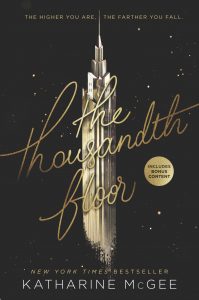 The Thousandth Floor by Katharine McGee, Reviewed by Lecia Sun

The Thousandth Floor by Katharine McGee is a futuristic YA novel that I could not put down! The book takes place in the year 2118 where New York City is replaced by a 1000-floor Manhattan tower. It begins with an unknown girl falling from the 1000th floor, leading readers to wonder how she got there and why she fell. Then the book backtracks to two months earlier to the perspectives of five teenagers. There is Avery, Leda, Eris, Rylin, and Watt and each perspective is distinct and unique, and one cannot exist without changing the premise of the story. McGee makes you want to sympathize and understand more of each character’s motivations, even when their motivations conflict with other characters’ motivations. The friendships between the girls are realistic and layered, tied in together by lies, betrayal, and secrets.

Many aspects of this novel make it very interesting to read, such as the fun, exciting world-building. Futuristic gadgets, such as glasses with Google search capabilities and smart contact lenses, were used in the character’s everyday life. There were also alcohol bubbles people could drink from a straw, a boy with a computer linked in his brain, holographic videos used in classrooms, and so much more. Despite the high-tech world, the high school drama makes the story relatable to today’s time.

Another aspect of the book that I thought was well done was nuanced themes that explore class and privilege, even in a futuristic setting. The higher up you live in the tower, the wealthier you are. McGee contrasts the sparkling lifestyle and mindset of the rich kids living in the upper levels in the tower with the kids in the lower levels who don’t have the same luxuries as the uptower kids. Class and privilege play a large role in the character’s friendships and interactions with each other, adding depth to each character’s motivations and needs.

Though I believe the ending of the story should have been handled better, this character-driven story was an entertaining read that had me hooked from the beginning. 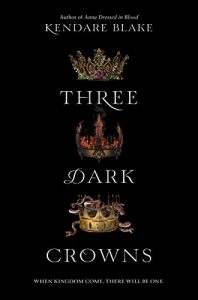 Three Dark Crowns by Kendare Blake is about three sisters with different magical abilities competing for the throne. There are three chosen ones in every generation, but only one can be queen by killing her other two sisters. Mirabella is an elemental and known to be the most powerful; Katharine, a poisoner who can eat the deadliest toxins; and Arsinoe, a naturalist who is connected to nature and animals. As tradition goes, they are separated as children before their powers manifest and entrusted in the care of families that will train the girls for battle after their sixteenth birthday. The story develops quite slowly towards the novel’s climax: a festival that marks the beginning of the fight for the throne. This is probably because this book is the first in a four-part series, and the ending leaves you in suspense to pick up the second novel where the first left off.

While the three other books that follow are much more thrilling than the first, Three Dark Crowns focuses more on the queens’ character development, their romances, and the rules of the island Fennbirn. Most of the character development was worthwhile to read because it made the motivations and the actions of the queens in the later books more understandable and impactful. Mirabella may be the strongest, but she does not want to kill her sisters. Katharine is a weak poisoner who is constantly sick from the amount of poison in her body, but she wants to prove she is worthy. Arsinoe’s powers are practically nonexistent, but she has great friends that support her. The in-depth world-building impressed me, such as the tensions between the different sects of the island and the people who represent the queens, the history of Fennbirn, and their customs/traditions. It was clear that many of these aspects had larger roles to play in the later books, and I was excited to see how the author would tie them into the story of the three queens. I was anticipating more action scenes in this book, but they appeared towards the end of the novel and were mostly saved for the sequel. The book starts a bit slow, but the ending and cliffhanger shocked and captivated me. This is why I would recommend this book for anyone who enjoys reading longer series and being invested in the world the author has created. 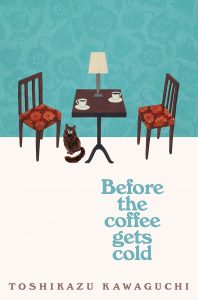 Before the Coffee Gets Cold by Toshikazu Kawaguchi, Reviewed by Lecia Sun

This Japanese novel about a cafe where customers have the ability to travel back in time is a heart-warming story. Kawaguchi sets up the idea of time traveling in an underground coffee shop, where only one person can sit in a specific chair at a specific time. Once in another time, the timer traveler has to drink a cup of coffee before it gets cold, hence the book’s title. The book describes four time-traveling stories, with each time traveler having some connection to the coffee shop. The first story is that of a woman who wants one moment to speak with her loved one before they ended their long relationship on poor terms, the second is that of a loyal customer who wants to go back in time to give his wife a love letter, the third is of a restaurant owner who wished to see her sister one last time, and the last is of a mother traveling into the future to meet her unborn daughter.

Kawaguchi takes the idea of time travel to ask what someone would do or say if given a chance to travel back in time, intertwining topics such as Alzheimer’s disease and the tragic deaths of the people closest to them. I found a common theme across all four stories that, especially under the time constraint, the time traveler was first lost for words, did not say as much as they planned to, and then felt a sense of closure as they returned back to their time. But it was what the time traveler did with their experience afterward in their current time that had more of an impact on me than the people’s experiences in an alternate time reality. As Kawaguchi puts it, “no matter what difficulties people face, they will always have the strength to overcome them. It just takes heart. And if the chair can change someone’s heart, it clearly has its purpose.” The four time travelers each had their own experiences and motivations for time traveling (some held on to the belief that they could change the past to change the present, which did not work). Still, in the end, they chose to make the most out of their reality, which I believe is such an optimistic and encouraging message to convey.

While the writing style was quite inconsistent with sometimes large chunks of info dumps, long monologues, and actions of the characters being all too similar to that of stage directions for a play, the whole premise of the plot made the book enjoyable. I recommend this book to readers who are seeking a quick read, but one whose message lingers far after they have finished it.

Lovely War puts a creative spin on the classic Greek myths, intertwining the myth of the goddess of love and the god of war with the World Wars to discuss why love and war are always bound together. Just as the Greek myth goes, Aphrodite and Ares are caught in a golden net set by Aphrodite’s jealous husband Hephaestus, but this reimagined tale is set in the backdrop of World War II. Before exposing her to the rest of the Greek gods, which occurs in the myth, Hephaestus allows Aphrodite to plead her case, to which Aphrodite tells the love story of two couples who met during the Great War. Berry combines the symbolism of love and war with music and death by introducing the perspectives of Aphrodite, Ares, Apollo, and Hades, each of whom influenced the two love stories.

gods—Aphrodite in particular—and how their affinities are representative of their beliefs and attitudes toward war. Ares naturally thrived off of war, while Aphrodite was attracted to conflict for the beautiful love stories that bloomed quickly under irregular circumstances. It made the gods much more realistic with flaws and desires that only become heightened during a state of conflict.

Berry brings up topics from history that are not as frequently discussed in World War books, such as the segregation and discrimination of black soldiers during the war. She also discusses the influential role of music during the Great War and how certain black soldiers used jazz to uplift themselves. Using the love story of Colette and Aubrey, she brings in real groups and people such as the 369th Infantry Regiment, or Harlem Hellfighters, and their bandleader James Reese Europe. I thought it was a clever way of connecting war with music and love.

Overall, I highly recommend this book to anyone interested in historical fiction or Greek mythology, as this book was an enjoyable read. As someone who knows much about Greek mythology, I appreciate the details and complexity Berry adds to the love stories during the Great War and the Greek Gods who took a liking to these four individuals.